Showing posts from July, 2017
Show all

As many Americans have probably heard by now, there is going to be a total solar eclipse on August 21, 2017 and the path of totality will be sweeping (at about 2300 miles per hour) across the continental United States , starting in the Northwest and ending off the coast of the Southeast. New Jersey will only be able to see a partial eclipse, but if the sky is clear (fingers crossed), it is still an exciting thing to watch. I have seen several solar eclipses in my life and a number of lunar eclipses, which often appear as a coppery red rather than total darkness. The Bible refers to this type of eclipse as “the Moon turning to blood.” The Ewing Branch of the Mercer County Library will be having an eclipse viewing event for both children and adults called The Great American Eclipse Viewing . Information about the event will be in our August programs/events calendars. There are many websites on the upcoming solar eclipse, but here is one that I liked from Space.com : How Long Will
Post a Comment
Read more 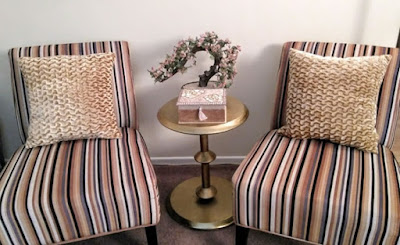 It is very important to decorate your home in a way that brings you happiness and comfort. It does not need to be perfect and photo shoot-ready but, when you come home from a long and stressful day, you want that welcoming feeling as you walk into your house. Whether you own it or rent it, personalizing your space gives you a sense of ownership and pride. Some people accomplish this with soft lighting or a particular paint color on the walls. Others enjoy having inspirational sayings or pictures of loved ones positioned around the house. Comfortable or elegant furnishings along with decorative objects that have a particular meaning or memory can also reflect your personality and history. Most importantly, when you get tired of things the way they are, you can change the décor a little or a lot, and freshen up your space to change the mood and energy of the entire room. Different colors have a definite effect on your mood and disposition. Bright colors uplift your mood whi
1 comment
Read more 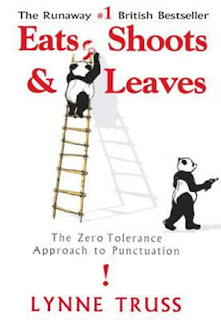 Way back in 2003, a British publisher—Profile Books, Ltd.—issued a book titled Eats, Shoots & Leaves: The Zero Tolerance Approach to Punctuation by one Lynne Truss ; the book became so inexplicably popular on John Bull’s island that, in 2004, Gotham Books, an imprint of Penguin, published an edition for us here in the colonies that also became a number one bestseller. Eats, Shoots & Leaves is the book’s official title, though it should be noted that its jacket (left) depicts a panda on a ladder assiduously painting over the titular comma while another panda (or the same one, moments later?) with a gun walks off, stage-left—a visual depiction of the comma-laden meaning of the title. That comma’s presence or absence matters for purposes of meaning-interpretation; and the difference in meaning between the comma-laden version of the phrase and the comma-free version serves as rationale for the existence of the book itself. Without the comma, the phrase might refer to the
1 comment
Read more

The past few years have seen much discussion on healthcare in the US and it is widely recognized that medical care here has become unaffordable and riddled with inefficiencies. The United States spends a fifth of its gross domestic product on healthcare—more than twice the average spent by any other developed country and yet its medical outcomes on many indicators of quality such as life expectancy, infant mortality, immunizations, and death from hospital-acquired infections are lagging behind those achieved by other industrialized countries. Despite the availability of sophisticated medical technology and advanced treatment, medical care remains inaccessible to many. Much of the recent discussion of proposed legislation lacks focus on measures to bring down the runaway prices that have become the hallmark of the American medical industry. The book selections this month address some of the core problems underlying the healthcare system in the US and their possible solutions. All book
Post a Comment
Read more

Read a Book and Watch the Movie 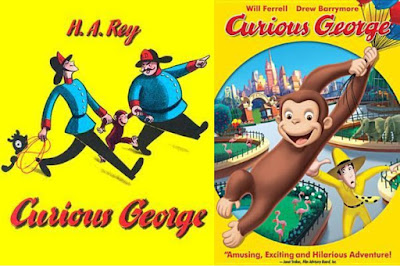 Spark your child’s love of reading this summer with a fun activity. Even with the variety of children’s books available these days it can be difficult to get some children reading. Why not try a new approach to motivate your children? Start a family book club where you read a book together, and then see the movie adaptation. This may be the hook your child needs to pick up the next book. Many children’s books have been made into successful movies. Some of the well-known movie adaptations of children’s books include the Harry Potter series by JK Rowling , Mary Poppins by P.L. Travers and the Wizard of Oz by L. Frank Baum . Recently, the Captain Underpants series by Dav Pilkey was adapted to film and many young patrons are streaming into the library looking for more books from the series. My family has paired many books with movies throughout the years. The Series of Unfortunate Events by Lemony Snicket was one of our favorites. My husband and I read many of the books aloud to
1 comment
Read more

Kids' Lit Is Not Just for the Kids! 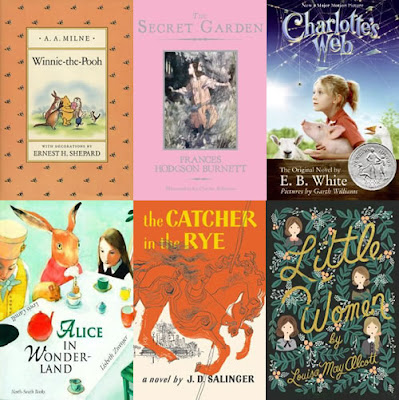 You would expect that I, as a librarian, have always been an avid reader and I am. My childhood was full of books I remember fondly and I bet, for many of you, yours was too. We moved a few times in my childhood and one of the first things my mother would do in a new town is seek out the library and get us registered with our own library cards. I remember we would come home with piles of books in our arms. I and my siblings would plow through the beautiful picture books before returning them to the library to find more. When I was older, I started discovering the wonderful children’s classics including Milne ’s Winnie-the Pooh and The House at Pooh Corner , White ’s Charlotte’s Web , and Burnett ’s The Secret Garden . As a teen I read Carroll ’s Alice in Wonderland , Salinger ’s The Catcher in the Rye , and Alcott ’s Little Women . In these stories I would be swept away to far-away times and places and learn about universal truths and the complexity of life. I would learn the impo
Post a Comment
Read more

Fun Day Trips for Kids in and around NJ 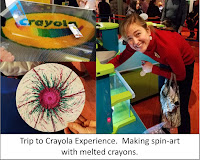 Summer means no school, longer days, and just maybe the time to take some family trips! Not every trip has to involve a long drive or plane ride, though; we have some neat destinations right in our state (or very close-by) that can make for some fun day trips. My family visited the Crayola Factory earlier this year and Medieval Times for my birthday in May. We had a lot of fun at both, and we have been looking for more places to visit! Here is a list of 15 places and activities that I have enjoyed visiting or were recommended by friends, along with some suggested resources for finding and making your own list. In New Jersey: Howell Living History Farm Howell is a living history farm, meaning it practices farming as it was done in NJ between 1890 and 1910. The farm is open Tuesday through Sunday, however most of their programs are on the weekend. They have lots of activities for kids looking to get their hands dirty, including gathering honey, making milk and butter, hog s
Post a Comment
Read more
More posts