Showing posts from April, 2012
Show all

April 27, 2012
Italian filmmaking, especially since the end of the Second World War, has entertained audiences around the world and provided inspiration for many filmmakers in the United States, including Martin Scorsese,  director of the documentary Il Mio Viaggio in Italia (My Voyage in Italy) .  At the Mercer County Library, we have a wide selection of DVDs of classic Italian films by directors such as Fellini, Visconti, Antonioni and Pasolini, de Sica and others who are known around the world for their contributions to filmmaking. In addition, we have books that discuss the history of Italian cinema and individual directors. Anyone who wants to research the contributions Italy has made to world cinema will find plenty to focus on at the Mercer County Library System. Books on Italian Cinema: A good overview for beginners is A History of Italian Cinema by Peter Bondanella. This gives an overview of Italian cinema from the postwar era to the present, including neorealism, comedy, horror, we
Post a Comment
Read more

At the reference desk, I get a lot of questions about graphic novels. Children ask about graphic novels on their summer reading lists, teenagers ask about new graphic novels in our collection, and parents ask, “What is a graphic novel anyway?” Graphic novels can be described as novels in a visual format. Similar to prehistoric times, graphic novels use sequential art to convey a story. Educator Gail de Vos describes graphic novels as “bound books, fiction and non-fiction, created in the comic book format and issued an ISBN.” (Serchay, 2010). The term was coined by Richard Kyle in a 1960s issue of CAPA-alpha, an amateur press publication specializing in comics. (Serchay, 2010). Will Eisner, creator of comic series The Spirit , popularized the term with the subsequent publication of A Contract with God and Other Tenement Stories in the 1970s. (Pawuk, 2006). While A Contract with God was not the first graphic novel, its influence caused the term to become part of modern vocabulary.
Post a Comment
Read more

There is an Indian Proverb which says “Tell me a fact, and I’ll learn.  Tell me a truth and I’ll believe, but tell me a story and it will live in my heart forever.” Storytelling has been shaping, defining and preserving cultures and tradition since the dawn of civilization.  It is an ancient oral art linking one era to another, one event to another and one tradition to another.  It is believed that even early cave paintings were a form of storytelling.  Even with the advent of the written word storytelling was invaluable in educating the masses who could neither read nor write. With the rise of storytelling devices, storytelling is changing.  Traditional storytelling is being replaced by the internet, radio and other new forms of media.  Traditional oral storytelling can still be enjoyed at festivals, conferences and powwows throughout the United States, Canada and Europe where storytelling is promoted. Storytelling will never die out.  Stories that are shared around the kitchen
Post a Comment
Read more

Get to Know your Outlook Calendar! 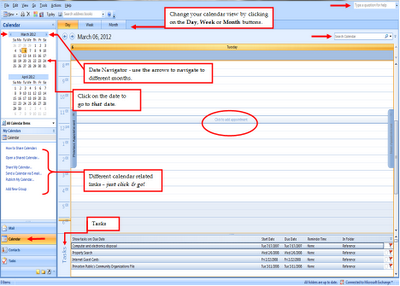 Forgot all about that important meeting that was scheduled months ago? Feeling rushed and perpetually running late for appointments? Too many reminder notes scattered about on your desk? Then it’s time to put your Outlook calendar to use! Microsoft Outlook offers a versatile calendar that will make you an expert in time-management in no time! You can use the calendar to schedule meetings and set up reminders: never forget a birthday, a dentist appointment, or be late for a meeting again. Use the Recurrence feature to schedule an event that occurs more than once.  Assign color categories to make it easy to find an event or to indicate free/busy time. To access the calendar , click the Calendar button on the Navigation Pane .  Not only will you see the calendar but on the Navigation Pane you will see other calendar-related options such as opening a shared calendar, or finding out how to add a new group. The calendar listed under My Calendars is your main/default calendar but you can
Post a Comment
Read more

Celebrate a style of music that is uniquely American with the Mercer County Library’s collection of books about jazz, as well as recordings by classic and contemporary jazz masters—from John Coltrane and Miles Davis to Pat Metheny and Dave Koz. At the Jazz Band Ball: Sixty Years on the Jazz Scene By Nat Hentoff The author, a renowned jazz critic, civil liberties activist, and fearless contrarian, has lived through much of jazz's history and has known many of jazz's most important figures, often as friend and confidant. Hentoff has been a tireless advocate for the neglected parts of jazz history, including forgotten sidemen and -women. This volume includes his best recent work--short essays, long interviews, and personal recollections. From Duke Ellington and Louis Armstrong to Ornette Coleman and Quincy Jones, Hentoff brings the jazz greats to life and traces their art to gospel, blues, and many other forms of American music. At the Jazz Band Ball also includes Hentoff'
Post a Comment
Read more

April 10, 2012
Mercer County Library System recently completed a renovation of the internet computers at all of our branches.  The new set-up brings more flexibility, more programs and two new services to our patrons.  PC users can now edit photos, scan and print in color. Paint Shop Pro X2 has been added to each of the public access internet PCs.  The program is similar to PhotoShop Elements and provides the user with a full suite of digital photo editing options, ranging from basic tasks such as cropping to more advanced tools such as object removal and artistic filters. Google Earth, Google Chrome, and OverDrive Media Console have also been added to the computers.  With Google Earth, patrons can view photographic maps of the world.  Google Chrome adds another web browser option for patrons, joining Firefox, Internet Explorer and Safari.  The OverDrive Media Console will allow patrons to download and listen to audiobooks from the library's digital collection or transfer them to most mp3
Post a Comment
Read more 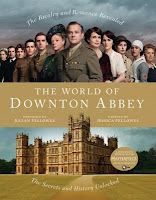 Downton Abbey , the captivating television drama series aired by Public Television on Masterpiece Theater, recently completed a resoundingly successful run of its second season.  A joint British/US production, written by Julian Fellowes, the show is set in Edwardian England in the early 1900s and follows the fortunes and tribulations of the Earl and Countess of Grantham, their family   and the entourage of servants residing in the picturesque estates of Downton Abbey. It is set during the time when England was caught in the throes of World War I and the air was rife with the whisperings of social change. The show has won numerous awards including the Emmy and the Golden Globe, and has been viewed by millions of eager fans all over the world. The spectacular success of the show has ignited an avid interest for books relating to British aristocracy and the Edwardian era of British history.  With Season Three set to air only in early 2013, Downton Abbey fans have plenty of time to soak up
Post a Comment
Read more
More posts