Showing posts from March, 2012
Show all

From Farm to Table @ Your Library 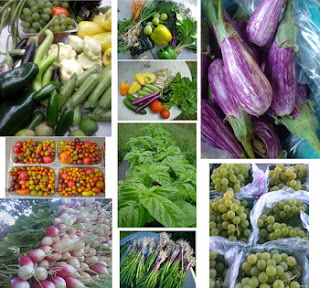 This month, my book club decided to branch out and read a non-fiction title. One member suggested Animal, Vegetable, Miracle: A Year of Food Life by Barbara Kingsolver, and we all dove in. In a nutshell, the book details the challenge Kingsolver and her family took: to consume only locally produced foods for one entire year. In fact, a lot of what they consumed was actually produced by themselves on their newly occupied farm in rural Appalachia. Sounds like quite the challenge, right? Throughout the book, Kingsolver's husband, Steven Hopp (an environmental studies professor), provides sidebars, which he describes as "fifty-cent buckets of a dollar's worth of goods." It was one of Hopp's sidebars, "Oily Food," which made me especially aware of my (and my family's) part in sustainability. "Oily Food" outlines the huge amount of fossil fuels a majority of us consume due to the amount of traveling required to get food from the farm to you
Post a Comment
Read more

The Other Motion Picture Awards 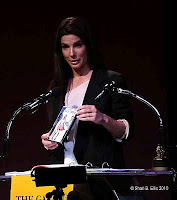 About a month ago, Americans were star-struck watching who would win the Academy Award for Best Picture, Best Actress, Best Actor, etc.  Now, some of us are waiting to hear the winners of the Golden Raspberry Award! The Razzies are in their thirty-second year of presenting “dis-honors for the worst achievements in film.”  On April 1, awards will be given in categories such as: Worst Picture, Worst Actress and Actor, and Worst Prequel, Remake, Rip-Off or Sequel.  In the history of the Razzies, only two actors have personally accepted their awards – Halle Berry for Catwoman and Sandra Bullock for All About Steve . This year the frontrunner for Worst Picture is Adam Sandler’s Jack & Jill .  In addition, the cast of Jack & Jill are in line for Worst Actor, Worst Actress (both Adam Sandler), Worst Supporting Actor and Worst Supporting Actress.  Will it be a sweep? You can see the full list of this year’s Razzie nominees on their official site .  If there’s any you missed, ch
Post a Comment
Read more

A Children’s Librarian’s Version of “My Favorite Things” 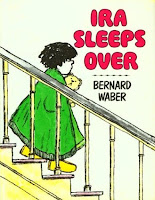 As a librarian who primarily serves children, my favorite things are invariably books.  Since I have been a librarian since 1993, my list is understandably long and varied.  Different books become my favorite for different reasons.  I would like to share the titles of some of my favorite picture books and the reasons they are my favorites. One of my favorites from the start of my career that I still read today is, Ira Sleeps Over by Bernard Waber.  It remains a favorite in part for the illustrations, and in part for the back and forth dialogue between Ira and his sister, and Ira and best friend Reggie.  The illustrations are full of the details of family life, as is the dialogue and side comments between Ira and his sister.  My favorite side remark occurs when Ira comes home early from the sleepover and remarks of his sister that “she was still up.”  I can hear myself saying the same thing in that same slightly outraged tone of voice, when a sibling was extended a treat that I misse
Post a Comment
Read more 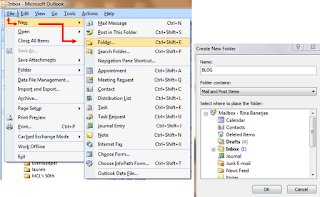 Is your mailbox cluttered and disorganized making it hard for you to find the message you need? Outlook offers several different ways for you to organize your mailbox: you can create folders and group similar messages in specific folders, Assign a Category , or use the Flag for follow Up feature. You can also set up your Outlook to sort your messages by date, sender or file size enabling you to find the message you need quickly. Or, you can change the way Outlook displays your messages so as to make it easier to identify the required message. Create Folders for Similar Messages : you can easily create a folder for your book club and perhaps another one for your blog. Now when you get a message about your book club, or your blog, move it to the appropriate folder so when you need to see a message that is related to your book club, or your blog, you know where to look! It is easy to create a new folder – open Outlook, click on File , point to New and then click on Folder . In the C
Post a Comment
Read more

In my last posting , I discussed the Golden Age of Science Fiction, a period in the 30s and 40s when writers such as Isaac Asimov and Robert Heinlein created many of the classics of modern science fiction.  But by the 1960s and 70s, during the time of the Beatles and youth rebellion, a lot of writers and readers wanted a different type of science fiction, a style of writing that reflected the turbulence of politics and society at the time.  The New Wave writers, such as Michael Moorcock, Philip K. Dick, Harlan Ellison, J.G. Ballard, and Thomas Disch, produced science fiction that included large amounts of literary experimentation, a focus on soft rather than hard science, and a willingness to break taboos.  New Wave writers also displayed a greater concern with writing style and characterization. Here are some New Wave books every science fiction fan should read: New Worlds: an Anthology by Michael Moorcock A collection of stories from New Worlds Magazine, the British
Post a Comment
Read more

I resisted the urge to use some witty headline for this article, but I am sure you have seen them all over the internet, on TV or in print – what’s pinteresting today, pinteresting facts about new social website, and anything with the word pinsanity in it.  But just what is all the buzz about and is this a website you should be checking out or using? Pinterest has a simple concept behind it, recreate your kitchen bulletin board on a website and add in a touch of Facebook and Twitter.  Users “pin” interesting items they find on the internet to their boards, everything from recipes to fun websites to inspiring photos.  Friends can see each other’s boards and leave comments or click a button to “repin” the information to their boards. The buzz has a lot to do with how fast the website has grown, topping 10 million users in December after an August 2011 launch.  But Alexandra Chang of MacWorld may have hit the nail in the head in her column about the site , noting that what makes it
Post a Comment
Read more

The Art of Reading 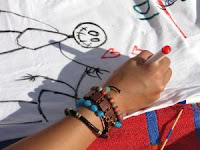 Mercer County Library System announces its spring 2012 art show, “The Art of Reading.”  Children in grades 4 through 8 will be able to submit one painting or drawing, no bigger than 9”x12” to their local Mercer County Branch Library by Friday, March 23, 2012.  The art work will be judged on adherence to the theme, “The Art of Reading,” content, form and texture and will be displayed in each branch library for the first two weeks of April. A panel of local judges from each community will award local prizes of first, second and third place. The first, second and third place winners from each branch will then go to the Lawrence Headquarters Branch for a final system-wide judging. There will be a distribution of prizes and an art reception on Sunday, April 29th from 1-2 pm. Refreshments will be served.  For more information log on to the Library System’s website . Here are some art-related websites that may inspire you to explore and celebrate art! Teach Kids Art A site for art teach
Post a Comment
Read more

Each year in November the literary world awaits the results of the National Book Awards with eager anticipation and much speculation about likely winners.  The awards are presented by the National Book Foundation for excellence in writing by US authors in the categories of fiction, nonfiction and poetry. Each category is judged by a separate panel of distinguished authors who have achieved literary excellence in their own respective genres. The 2011 winners include Jesmyn Ward for Salvage the Bones in the category of fiction,   Stephen Greenblatt for The Swerve: How the World Became Modern in the nonfiction genre, and Nikky Finney for Head off &Split in the poetry category. Among the finalists are featured   Andrew Krivak for his book, The Sojourn , Julie Otsuka for Buddha in the Attic , and Laura Redniss for her biography, Radioactive: Pierre and Marie Curie: Tale of Love and Fallout . Fiction Salvage the Bones by Jesmyn Ward
Post a Comment
Read more

I like to eat.  I do not particularly enjoy cooking. I have friends who love to cook; I have family members who try new recipes and experiment with ingredients, then post mouth-watering pictures of the results on Facebook. I am in awe of these people; I have the same admiration and respect for them as I do for the kind of person who can pick up dance moves just by watching, go skiing without significantly injuring themselves, or sit down at a piano and play any song you throw at them (with both hands! and all their fingers! and with chords and everything!). Those people are not me. But however much a lifetime of restaurants, takeout, and cold-cereal-for-dinner might appeal to me, I concede that those options are neither healthy nor economical, and I accept cooking as a necessity. But that doesn’t mean I can’t make it as easy as possible. I’m talking about the whole experience – I want recipes that are easy to find, easy to shop for, and easy to cook. I’ve done some research and f
Post a Comment
Read more
More posts