Showing posts from October, 2011
Show all

Breast cancer is the most common cancer in women in the United States, aside from skin cancer, and is the second leading cause of cancer death in women (after lung cancer). According to the American Cancer Society, an estimated 230,480 new cases of invasive breast cancer are expected to be diagnosed among women in the United States this year. An estimated 39,520 women are expected to die from the disease in 2011 alone. Today, there are more than 2.5 million breast cancer survivors living in the United States. The Mercer County Library System has a comprehensive collection of books on this important topic, including the following recently-published titles: The Breast Cancer Companion: A Guide for the Newly Diagnosed By Nancy Sokolowksi and Valerie Rossi Named a 2010 Best Consumer Health by the American Journal of Nursing The Breast Cancer Companion is a step-by-step guide through treatment for the more than two million women living with breast cancer in the United States. It
Post a Comment
Read more

Myned Your own Library Business

October 25, 2011
If you own an Apple iDevice, you can now download a free app that will connect you to the Mercer County Library System. Called BookMyne, the app will also eventually be available for Android and Blackberry users and can be used to access your library account or place holds while on the go. To get the app, visit the App Store from your iPhone, iPod Touch iPad or through iTunes. The app is produced by SirsiDynix . Once installed, look for libraries tab at the bottom of the app to get started by finding your local library. Even though you will have access to all branches of the Mercer County Library System, you should look for your local branch in the app so search for Ewing or Twin Rivers, for example. You could also use the Nearby tab at the top of the app to let the device’s location settings find libraries within 25 miles and pick your branch from there. Once you find the branch in the list, touch the star to add it to your favorites – you can have more than one favorite, so p
2 comments
Read more

October 21, 2011
Last month, part one of this article covered Football and Cheerleading. Today, we present more favorite fall activities: Fun Facts and Trivial Trivia Marching band Marching band is near and dear to my heart because I was a piccolo & flute player in the Nottingham Northstars Marching Unit for my four years of high school. (Yes, I was lucky to play the tiniest, lightest instruments possible) I remember sweltering through band camp in August, only to freeze during the night games in late fall. Then there was my daily run from last period’s practice on the field, to my locker, to the bus - always good exercise! Figuring out the drill sheets was a challenge my first year, as were learning how to do precise roll steps and making sure I didn’t run into anyone as I tried to read music and march simultaneously. On a positive note, the excitement before each game was contagious, and I always drew the Nottingham “N” on my face in blue marker (sometimes backwards) and accessorized
1 comment
Read more

On October 5, 2011 Steve Jobs the enigmatic and dynamic technology innovator and business entrepreneur whose name was synonymous with Apple’s Mac line of computers as well as the iPod, the iPhone and the iPad lost his long struggle with cancer. Best known for his creativity and passion for merging engineering and aesthetics together, Steve Jobs transformed and made an indelible mark across a full gamut of industries- music, personal computers, tablet computing, telecommunications, animated movies and digital publishing. The products he helped design have captured the imagination of millions all over the world, and sparked an interest in technology among his users and a whole generation of young people. This week’s picks for our column focus on Steve Jobs the person, his passions, his personal style of management and innovation and the impact he had on his company and beyond. The lessons that we can draw from his extraordinary saga are especially relevant at a time when so many busin
Post a Comment
Read more

October 14, 2011
On October 14, 1644, Admiral Sir William Penn and Margaret Jasper welcomed their first child, William, into the world. Little did they know, their son would make a name in the history books as a Quaker hero and the “Founder of Pennsylvania.” Using materials accessible via MCLS’ collection and resources, I’ve picked ten bits of information about William Penn to celebrate his birthday: In 1662, Penn was expelled from Oxford University for his refusal to attend the university’s Church of England services (Kroll & Himler, 2000). King Charles II insisted that the colony be named Pennsylvania (“Penn’s woods”) to honor Penn’s late father, Sir William. Penn worried people would think the land was named for him; he wished to name his new colony New Wales or Sylvania, but the king could not be dissuaded (Baczynski, 2004). King Charles II granted Penn the land for Pennsylvania in 1681, which Penn governed for approximately 35 years until his death in 1718. In the two trips Penn made to the
Post a Comment
Read more

October 07, 2011
As every sports fan knows, fall is football season! For most of the high schools in Mercer County, that also means marching band, drill team, color guard, and fall cheerleading season, too. For all those interested in these fall activities, keep reading to learn some interesting facts, discover some good books and movies, and find links to all local high school schedules. Part one of this miniseries will deal with football and cheerleading, and part two will cover the marching unit. Fun Facts & Trivial Trivia Cheerleading Pom-pons, normally associated with cheerleaders, are only used with cheers that have few stunts. They are not used in routines with difficult moves because they get in the way. How do you spell ‘pom-pom’? Not that way! The correct forms are “pom pons” or the hyphenated “pom-pons.” The origin of the word is unclear, but it may be derived from the French “pompe” meaning “display” or “parade.” Cheerleading initially began as an all-male activity up
Post a Comment
Read more

Word, You’re Not the Boss of Me! 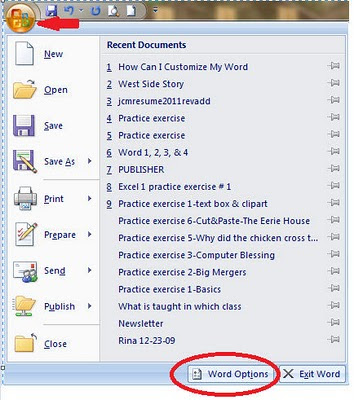 Losing control of your Word document? Trying to write poetry like E.E. Cummings, all neatly typed in lower case, but Word takes over and corrects it even before you finish firing your first poetic salvo? Dare to use minimal or creative punctuation and your document is covered in red and green squiggly lines! If you are tired of MS Word taking over your document, tailor Word to suit your need. Instead of settling for the default settings, you can change the way document content is displayed on the screen- and when printed. Change the way Word corrects and formats your text or change the way your documents are saved. Here’s how: Open Word. Click on the Office Button . Then click on Word Options . From here you can modify and customize the way you want Word to display, print, or correct your document. An absolute cornucopia of configuration options is available from the Word Options dialog box and it is easy for you to pick your preferences. Whether you want to change the color
1 comment
Read more
More posts