Showing posts from May, 2018
Show all

What’s Community Got To Do With It? 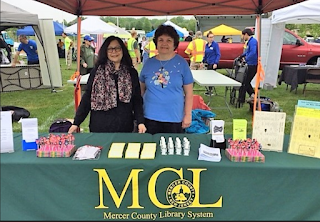 The epigraph to E.M. Forster’s novel Howards End is “Only connect.” While there may be more than one way to interpret this phrase in connection to the book, I like to believe that Forster, a self proclaimed humanist, was emphasizing the significance of social connections between people.  Only connect: overcoming the barriers of race, age, religion, language, background, and a multitude of other differences to create meaningful ties, relationships, and networks. Only connect: breaking superficial barriers of stereotypes and prejudice.  And, if we would only connect , we could lead happier and healthier lives without the mental and physical risks associated with loneliness and isolation. Nowhere was that more apparent than at the second annual West Windsor Community Day, Celebrating Unity . At a time when everything feels so divided and fraught, what better place to bring everyone together than Community Day; and what a perfect stage to promote the resources of the public library?
Post a Comment
Read more

Do you know where your towel is?

No?  Don’t panic. Have you tried consulting the guide or checking the lost and found at the restaurant at the end of the universe? If you have chuckled after reading this opening then you must be a fan of the author Douglas Adams and his very popular Hitchhiker’s Guide to the Galaxy series.  You also know that May 25 (possibly the day you are reading this) is Towel Day - celebrated by fans of Adams and his work by carrying a towel throughout the day.   “Why a towel?” you ask, well: “The Hitchhiker’s Guide to the Galaxy has a few things to say on the subject of towels. A towel, it says, is about the most massively useful thing an interstellar hitch hiker can have. … What the strag will think is that any man that can hitch the length and breadth of the Galaxy, rough it, slum it, struggle against terrible odds, win through and still know where his towel is, is clearly a man to be reckoned with.” – Chapter 3 of The Hitchhiker’s Guide to the Galaxy . (full quote) . So let’s go
Post a Comment
Read more

So you are in “paradise” just north of the equator and monitoring the inevitable late summer westbound tropical storm that has turned into hurricane force winds that has ultimately turned into an historic Category 5 monster that has decided to take a direct path onto your island.  You know the routine.  Put down the alcohol, cover the windows with anything and everything (you have tools, right?) and stock up with water food candles batteries radio flashlights. In a Category 3 and even possibly a 4, you might be sufficiently protected if you nail over your doors and windows with plywood.   These are historically the highest winds that the Caribbean has experienced, and they are plenty high enough.  You nail plywood over doors and windows and offer a little prayer for the roof to hold up.  Electric will be shut off, it will be very dark at night, and you will have to rough it for a few days.  But a Cat 5—and one with purported gusts of 220mph—brings you into Tornado-type results, and
2 comments
Read more

The Books vs. the Movie 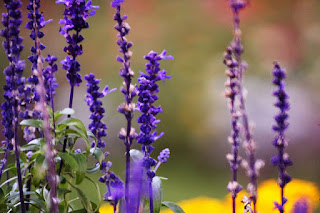 At the risk of losing my library degree, I am going to throw out what some may think is a bold statement.  There are times when the movie is better than the book.  There, I said it. When I told one of my colleagues about my using this idea as a blog post, his immediate reaction was, “Anna, you can’t do that. You’re a librarian!” As he and I, as well as others, started talking, we ended up coming up with quite the list. With some of the suggestions, there was a bit of debate whether the movie was actually better than the book. For example, was the movie The Godfather really better than Mario Puzo’s novel, or were they both excellent pieces in their own respective format? I have been in an ongoing debate with a friend from college about which is better: Alice Walker’s The Color Purple or Steven Spielberg’s movie adaptation. Now, don’t get me wrong, Walker’s book was groundbreaking, and it certainly stands the test of time.  The movie, however, is amazing in its own right. The actin
Post a Comment
Read more 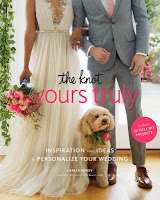 May is a month of many beginnings.  The sun is shining while the rain dissipates, the weather warms, the flowers bloom and many couples marry! A significant wedding took place in my family recently, and everything about it was spectacular. The months leading up to my niece’s wedding were full of phone calls with my sister fraught with details about the venue, the dress, the music, the flowers, and much more. When the wedding finally arrived, I was completely in awe of what my sister (and my niece) had accomplished. From the ballet flats they handed out for the women wearing painful heels, to the printed menus, to the exquisite flowers on the card table; no detail was forgotten. All this from a woman who has never seen an episode of “Say Yes to the Dress” !  Needless to say, I have a newfound respect for my sister, and am so thankful I have her to lean on (sometime in the very distant future, I hope) when I need to plan my own daughter’s wedding. Whether you are a mom, aunt, friend, o
Post a Comment
Read more

Planning and Enjoying a 25-Day European Itinerary from London to Rome, Part 2

This is the second part of a two part blog piece.  The first was published this past Tuesday. I saw the majority of sights I had wanted to, but definitely less than I thought I might get to during my initial planning. The city cards afford the luxury of skip-the-line access for most included sites.  For others, you are asked to make timed reservations in advance.  In Rome I saw the Vatican Museum and St. Peter’s Basilica in this manner.  In Milan, I pre-booked a ticket to the Duomo which did not offer skip-the-line access. However, I hadn’t noted that my scheduled afternoon fell on a “free admission” Sunday and therefore it was extremely crowded. I did not get to visit the inside at all, as I was out of time and had to make my next train connection to Venice.   In the bigger cities, it makes sense to note which attractions or museums are open evenings or might have a scheduled night each week when they are open later, to maximize your sight-seeing time.  Churches are usually open b
2 comments
Read more

Planning and Enjoying a 25-Day European Itinerary from London to Rome, part 1

This is a travel post on a recent solo trip I took in March. It is a lengthy post, and its slant is my planning process and some of the things I have learned rather than my impression of tourist sites. I know most people who enjoy taking trips would likely travel more if not for the constraints we all face, such as having time or money, health issues, raising kids, caring for family members, school calendars, or being able to schedule time away from work.  For me, some of these constraints have been lifted as I have gotten older. I have always enjoyed watching travel shows, reading about travel and following travel blogs, in anticipation of the day when I could begin to take the trips of my dreams.  In the past year or two I also purposefully began following several hundred more travel blogs to help me get started.  There are bloggers focusing on all types of trips including family travel, female travelers, volunteer travel, couples travel, student and educational travel, luxury tr
1 comment
Read more
More posts