Showing posts from September, 2012
Show all

Books can be a constructive way to introduce topics that deal with childhood behavior and be a springboard for discussing a child’s feelings about the topic.   It can be comforting to some kids to read about characters dealing with the same challenges.  Watching how characters overcome their problems can help families brainstorm their own solutions.  This process of relating books to real life issues is called bibliotherapy. The sites below have frequently updated lists of books that can help kids deal with different challenges.  Most of the titles mentioned are available at the library. Books That Heal Kids is a blog written by an elementary school counselor. She reviews recently published books and then adds how she shares each title with her students. The books mostly handle topics such as bullying, getting along with others, sportsmanship. There are also many books on recognizing and expressing emotions such as anger and disappointment.  Back posts are arranged by date or t
Post a Comment
Read more 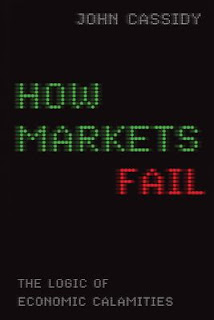 It was back in 2007 that the first rumblings of trouble in the US financial sector made an appearance. By 2008 the bursting of the housing bubble and mortgage subprime crisis resulted in chaos in the financial markets and the onset of a recession which has largely become endemic and has acquired global dimensions. Five years have passed by and yet the situation stays grim. The crisis in Europe in the face of soaring debts in Greece, Spain and Italy threatens to escalate and send shock waves over the entire global system. There is a slowdown in the Chinese and Indian economies with inevitable ripple effects on other countries through lower levels of demand. At the same time there seems to be no quick fix for the stagnating manufacturing sector in the US as investment and hiring continues to be held back and the high deficit levels remain worrisome. The critical question that arises is how we could deploy a combination of economic, monetary and fiscal policy measures to help rest
Post a Comment
Read more

10 Classic “Back to School” Movies for All Ages 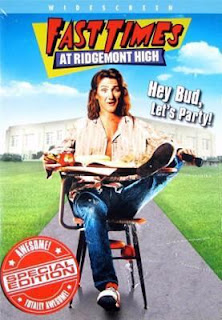 August 14, 2012 marked the 30-year anniversary of the release for a classic "back to school" film, Fast Times at Ridgemont High .  The 1982 film, written by Cameron Crowe and directed by Amy Heckerling, takes its viewers on a topsy turvy ride into the antics of a Southern California high school’s student body. Fast Times at Ridgemont High , as well as other films from our collection, allow you to take a trip back to school without actually having to relive it. Our collection offers a number of the classic school comedies, such as Ferris Bueller’s Day Off and Mean Girls, but you may be surprised at the variety of genres available to you to go “back to school.”  Take a look at a handful of what our library system has to offer: Casi Casi [Almost, Almost] (2006) Rated PG Emilio, a teenager who often finds himself being sent to the principle's office, has a crush on Jacklynne, the most popular girl in school. He decides to run for Student Council President to win her he
Post a Comment
Read more

When asked to describe an author’s works, one of the first distinctions to make is in regard to the intended audience: adults, young adults, or children.  Most authors seem to write exclusively for one age group, but there are some exceptions, especially now that young adult (YA) books are growing in popularity.  Here is a list of 6 cross-over authors.  How many do you know?                                 1. James Patterson (1947- ) James Patterson is known in adult circles for his crime thrillers, most notably the Alex Cross series , but he has also written the Women’s Murder Club series , the Michael Bennett series , and the Private series .  He has also written stand-alone thrillers, nonfiction, and romance novels ( Suzanne's Diary for Nicholas and Sam's Letters to Jennifer ).  At least nine have been made into TV or film adaptations, including Along Came a Spider (2001) with Morgan Freeman and Alex Cross , scheduled for release this October. In 2005, Patterson d
Post a Comment
Read more 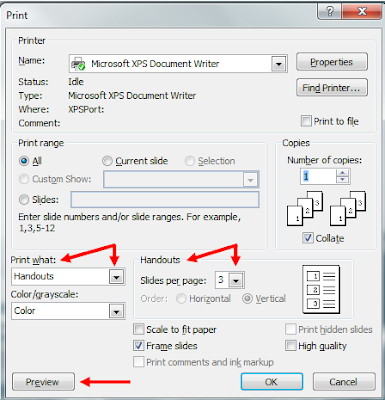 So you have created a terrific presentation with PowerPoint that you know will impress your audience. But being realistic, you know the audience, upon walking out of the presentation, will forget almost everything you talked about! Did they even get your contact information, you wonder, in case they have questions later on? How do you ensure that the audience will retain some significant portion of the information that you just imparted? Clearly, you need to create handouts so that long after your presentation is over, the participants will have all the data they need or want! You can use PowerPoint to create a handout or use the tool in PowerPoint to create a handout in MS Word. It’s easy and quick, and you don’t have to spend hours generating handouts: PowerPoint does most of the work for you! Here’s how: To create a handout in PowerPoint: After you have finished creating your PowerPoint presentation, click on the Office button and then click on Print . From the Print dialog box
2 comments
Read more
More posts