June 04, 2013
Last month we took a look the automatic modes on a camera and learned why it is important to understand how to set white balance and use an appropriate scene mode.  Today we continue our tutorial with a look at the manual setting options available on most advanced point and shoot and DSLR cameras.

On your camera’s dial you will find a set of four letters blocked off from the rest of your options, usually spelling out MASP.  These are the manual and semi-automatic (sometimes called professional) modes on the camera.  They are the Manual, Aperture Priority, Shutter Priority, and Program modes.

In order to understand the manual modes, it helps to understand the most basic aspect of photography, the exposure triangle.  In a nutshell, a photo will look great if the three aspects that control light exposure are set in the correct balance.  The three pieces of the triangle are aperture, shutter speed and ISO.  Photo Tuts+ has a terrific article explaining the triangle for beginners, including examples of how changes in one of the three settings will alter the image you capture.

The easiest piece for most people to understand is ISO, which is equivalent to the old film speed rating on film cameras.  The difference is, digital ISO measures the amount of light that hits the sensor in the camera and not a piece of film.  Just like in film cameras, a lower number means the camera is less sensitive to light, so the lowest ISOs require the most light to capture a crisp image.  For this reason, low numbers, such as 100 or 200, are considered slow and are often used only in bright light or for stationary objects, such as a well-lit portrait sitting.  Faster speeds, usually above 400 (800 and 1600 are also common) are used when the light is low or there is a lot of motion.  Sports photographers will often use 1600 or even 3200 or higher for indoor events like basketball or hockey where the light is poor and there is a lot of motion.  The drawback on ISO is, the higher the number, the more digital noise you see in the picture.  Digital noise is basically darker specs that take sharpness away from the image (think grainy film photos).  The only way to control digital noise is to lower the ISO or use a camera that can handle higher ranges of ISO (this will be noted in the camera’s specification sheet).  The reason you will want to set ISO manually is because the automatic setting will change rapidly based on light and perceived movement.  If you are setting up to take a picture of birds, you can get a good still photo but once they start to fly away, the ISO on automatic does not always catch up.  Setting it yourself lets you change it quickly when moving from stop action to faster motion.  Think of ISO as the painter of the picture, if it works slowly, it will catch a lot of detail (like a portrait painter) and if it works faster, you get an image of faster moving objects (there is no way to have a football player pause for a portrait while making a catch). 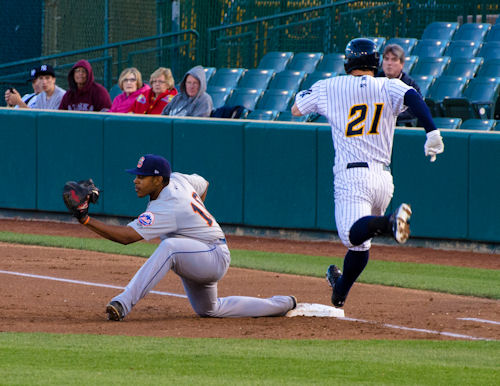 Shutter speed is perhaps the next easiest concept to understand, it is how long the shutter stays open when taking a picture.  In terms of light, the longer the shutter is open, the more light you get in the frame.  The pairing between shutter speed and ISO is, you will tend to use a higher ISO when you use a faster shutter speed so the sensor works faster to record the image given the lower light coming into the camera.  The most obvious setting is to use a fast shutter speed when there is a lot of light or there is a lot of action to capture.  Keeping the shutter open too long will turn an image blurry or overexpose (bleach) the color.  A fast shutter speed can lead to darker colors and shadows (underexposed), but keep the image crisp since there is less time to create blur by moving the camera or have the object you are photographing move.   Shutter speed is measured in seconds, so faster speeds are often a fraction of a second and the slowest speeds can be up to 30 seconds on most cameras. 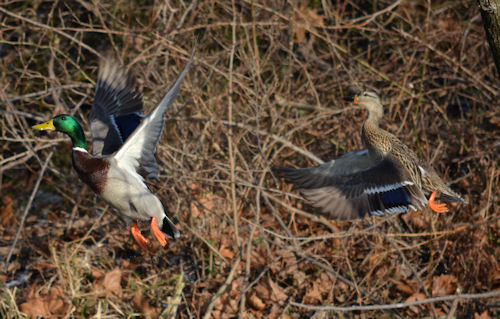 Aperture is always the hardest concept for most people to grasp, but it is often the most important setting to pay attention to.  Expressed as f stops, it is the measure of the size of the opening in the lens.  The aperture controls what part of the image is in focus (depth of field), based on how light reflects off the object.  The confusing part about aperture is, the lower the f/number the larger the opening, so an f/1.4 is considered a high aperture and an f/18 is a low aperture.  In general, lower apertures are used for landscape and wide angle shots so you pick up more detail in the background (deeper depth of field) - think of a mountain range as the background for a picture of livestock near a fence where you want to maintain some detail of the mountains.  Higher apertures will blur the background, so you do not distract the focus of a picture that is meant to emphasizes something in the foreground, such as when taking pictures of people (unless the point is to show the person in front of an object, like a landmark).  In the exposure triangle, aperture and shutter speed balance each other in that decreasing one can be offset by increasing the other to let in the same amount of light.  Since aperture doubles, i.e. 1.4 to 2.8 to 5.6, the shutter speed should decrease by double as the f-stop number goes up, for example from 1/60 to 1/30 of a second.

Example 3: Aperture is typically low when you want to focus on an object in the foreground, like this grackle. If the rail in the background was more detailed, it would be a distraction.  In this image, an aperture of f/7.1 was used, with a shutter speed of 1/800 and an ISO of 200. 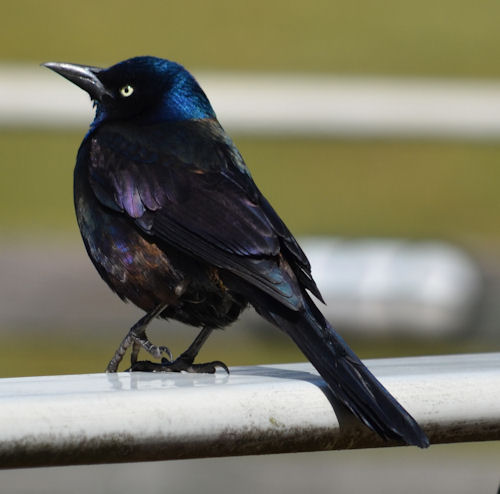 Getting back to the dial on your camera and the manual and semi-automatic modes, we can now match them to the exposure triangle.  The A mode is aperture priority, which lets you set the aperture yourself and the camera takes care of the shutter and ISO speeds.  Likewise, S is shutter priority, which lets you set shutter speed while the camera takes care of ISO and aperture.  Manual mode (M) lets you set all three yourself, while the program mode (P) lets you adjust any of the three, but the base you start from is what the camera would use in automatic mode.  The P mode is a good place to start if want to get a feel for how the three parts work together but do not want to spend a lot of time guessing at what to start with for the settings.

If you want to experiment with these manual settings to see how they all interact, take a look at the CameraSim website and “take” some pictures in any of these modes and with different settings on the exposure triangle.

Check back next month for some tips and tricks to use to make your photos more interesting or artistic.