August 16, 2016
Following last month’s column on books that analyzed the historical trends in standards of living, stagnant wages, and mounting inequality in the United States, this month’s book selections focus on whether a viable solution can be found to break this trend and put America back on the path of a vibrant economic system delivering equitable growth, steadily improving living standards, education and healthcare for all segments of the population. Looking for a solution from the vast canvas of America’s economic history, the books examine the vital role played historically by a mix of government guided economic policies (strategic investments), and business decisions guided by free market forces in supporting technology, science, innovation and economic growth. The argument that the authors make here is that a strong central government that invests and sets up appropriate economic policies for private entrepreneurs and innovators to flourish and thrive under is critical to ensure long term prosperity and equitable growth in a country. 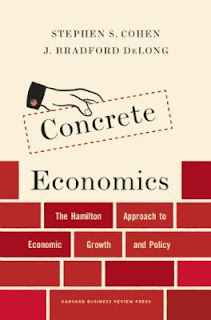 Concrete Economics: The Hamilton Approach to Economic Growth and Policy by Stephen Cohen and Bradford Delong
Stephen Cohen and Bradford Delong, both professors at Berkeley, take an incisive look into America’s history to determine what kind of economic policies have worked in the past. History points to the futility of allowing ideological premises and dogmas in shaping policy decisions and clearly indicates the importance of allowing pragmatism to dictate what would best serve the growth requirements of the economy. The authors attribute most prior successes to the economic strategies that created an ideal economic environment for business and private entrepreneurship to flourish. Alexander Hamilton, America’s first Treasury Secretary, created a strong foundation for a robust America by drafting a comprehensive economic strategy where the government created a modern financial system and funded investments in infrastructure through placing tariffs on imports that helped protect and allowed businesses to expand and grow America’s fledgling industries. Architecting new changes in the direction of economic growth continued under Abraham Lincoln, Teddy Roosevelt, Franklin Roosevelt and Dwight Eisenhower. Things started to change in the early 1980’s when the new direction was set not by pragmatism, but by ideology leading to the deregulation of finance and the expansion of transaction processing in both real estate and health care. At the same time there was a shift away from manufacturing and industrial growth to importing manufactured goods from East Asia. No overall policy direction was put in place that would replace the jobs lost from moving away from traditional industries with a new growth direction, resulting in a huge hit to the middle and working classes. To return to America’s earlier days of vast and positive growth, it is imperative to allow pragmatic policy to lay down the overall framework and direction of economic growth to be achieved by innovative business and entrepreneurs under free market conditions. 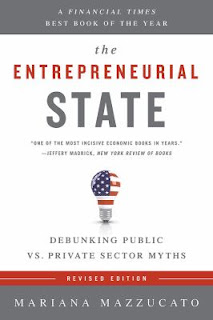 The Entrepreneurial State: Debunking Public vs. Private Sector Myths by Mariana Mazzucato
A Financial Times Best Book of the Year by Mariana Mazzucato, acclaimed economist and professor at the University of Sussex, presents a well researched empirical study examining the decisive role that the government has played in spurring technological innovation and economic growth. Her findings reveal that, in many instances, it is the government stepping into capital intensive and risky fields that private venture capital would be unwilling to touch, thereby creating new markets and advancements that are then leveraged by private industries to innovate and introduce new products and services. Such industries include education and basic sciences research that are critical underpinnings to a country’s growth but typically yield results over a long time horizon. A case in point is Apple, a legendary company revered for its innovation and unique vision. While undoubtedly Apple transformed the market with the introduction of its mobile products, what is not commonly discussed is how the groundwork for these products had already been laid out by the US government and the National Science Foundation in terms of military research and academic research funded in universities. Such research has produced the technology behind the Internet, touch screens, voice activated responses and GPS. The initial investments in Silicon Valley were similarly funded by the government, and Google’s search engine owes much to funding by the National Science Foundation. The author also extends the study beyond the United States, exploring the role of the state in Germany, Denmark, Brazil and China. In the next phase of her research, Mariana Mazzucato plans to include computations on the quantitative value that can be placed on the returns from state funded investments and the question of intellectual rights and patents for research financed through federal funding. This would help ensure that governments are adequately rewarded for investments in successful projects. 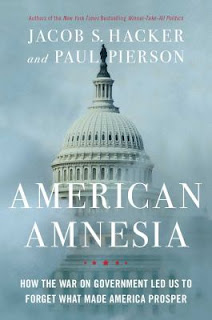 American Amnesia: How the War on Government Led Us to Forget What Made America Prosper by Jacob S. Hacker and Paul Pierson
Leading political economists, Jacob Hacker from Yale and Paul Pierson from Berkeley, go back into the annals of history to highlight the forces that helped put America on the road to prosperity. They single out the mixed economy that combines the power of dynamic competitive markets with a strong effective government as the foundation on which American prosperity has been built. Historically, it was strong governance and public investment that provided America with the foundation for a new growth trajectory that broke the centuries old cycle of poverty. In a mixed economy, the government invests in sectors providing public goods and services that are neglected by the narrow interests of private investments but are nevertheless vital for economic growth – an example of such industries would include infrastructure and public health. The federal government would also regulate private businesses to resolve any potential conflicts with the larger interests of the community. In the US, as recently as 1950, there existed a positive sentiment towards a strong effective government and a coalition that included both political parties and private industry working largely in synchrony. Gradually, however, businesses pursuing narrow short term goals steadily gained power as well as strong political backing, resulting in a breakdown of the coalition. The 1970’s ushered in sweeping changes in the country’s politics and institutions. The authors attribute the current lagging standards of living of the large majority of people as well as the huge income inequalities in the US to the breakdown of the mixed economy. They make a strong case for bringing back the mixed economy and a government that has the capacity to act and foster broad prosperity through enacting appropriate social and political reforms. This is especially important in the context of today’s globalized interdependent economies. To bring this about there is an urgent need to fix political institutions in the US that have created gridlock and inhibited efforts to launch bold economic initiatives.


-Nita Mathur
Books to Get You Thinking