Coney Island – What a Ride! 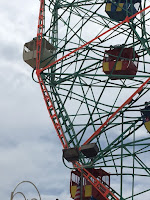 A great way to spend a summer day with the family is by visiting an amusement park along the boardwalk at the shore. My family and I recently went to Coney Island in Brooklyn, New York. Although we are not all fans of wild rides, there were many thrilling sights and sounds for everyone to appreciate. We saw hundreds of people relaxing and laughing, playing games of chance and enjoying the sea breezes and sunshine. And do not forget about the surf, sand and boardwalk!

Coney Island has long been a popular tourist destination for city-weary families looking for a little relief during the hot summer months. This small strip of land along the Atlantic Ocean was first discovered by Henry Hudson in 1609Note 1 Eliot, Marc. Song of Brooklyn: An Oral History of America’s Favorite Borough. New York, NY: Broadway Books, 2008. Print.. It is believed that the name for Coney may have come from the dutch word konijn meaning wild rabbit Note 2 Robbins, Michael and Palitz, Wendy. Brooklyn: A State of Mind. New York, NY: Workman Publishing, 2001. Print.. In 1829, a crushed seashell road was created to connect Coney Island to the mainland and an inn opened its doors. Soon, people flocked to the beach and this resort by the sea. Transportation at first was only by carriage ride. However, by the 1920s, Coney Island was connected to Manhattan by subway. 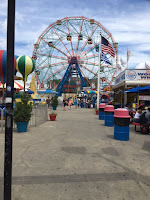 Over the years, Coney Island has offered a mix of family fun and awesome spectacle. What is not to like? There are little kid-friendly rides and death-defying thrill rides for adults. Your family can drive the bumper cars, play arcade games, and ride the carousel. Attractions you can visit include the out-of-the-ordinary Coney Island Circus Sideshow. Your family can also learn a little about local history at the Coney Island Museum. If you would like to see some marine life up close, the New York Aquarium is just steps away from the beach. One of our favorite places to visit is the Coney Art Walls. This outdoor museum and public art project highlights prominent street artists in large painted murals. And no visit to Coney Island is complete without a hot dog and a refreshing cold drink. Maybe you have heard of Nathan’s Famous hot dog stand which is celebrating its 100th anniversary this year (2016). 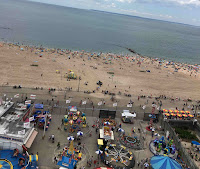 For more information about Coney Island, you can download the Coney Island Fun Map and check out all the attractions. Even if you cannot make it to Coney Island this year, there are excellent amusement parks to visit along the Jersey shore as well. From Atlantic City to Cape May there are many towns, beaches and destinations. Following are a list of books that may pique your family’s interest in a visit to a nearby beach front amusement park down by the boardwalk. 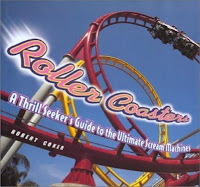 Amazing Amusement Park Rides by Meish Goldish
Describes the largest and most spectacular amusement park rides in the world and compares their various features to the size, speed, and characteristics of other things.

Amusement Parks of New Jersey by Jim Futrell
This comprehensive guide profiles 17 major amusement parks in the Garden State. Complete information on rides and attractions is accompanied by dozens of vintage photographs and postcard scenes.

Amusement Parks: Roller Coasters, Ferris Wheels, and Cotton Candy by Judy Alter
Chronicles the development of amusement parks in America, from state fairs to the Columbia Exposition and parks such as Coney Island, and on to the giant theme parks of today.

Roller Coasters: A Thrill-Seekers Guide to the Ultimate Scream Machines by Robert Coker
Thrill seeking knows no limits -- and roller coaster rides are a major food group for the thrill seeker's diet. From fifteenth-century Russian slides to the original Coney Island Cyclone to modern day steel gigacoasters like Cedar Point's Millennium Force, this breathtaking guide offers a wild ride through the evolution of roller coasters, bringing you close up to the world's scariest gravity-defying feats of fun.

At the Boardwalk by Kelly Ramsdell Fineman
From sunrise to sunset, the attractions of a beach boardwalk include popcorn, taffy, arcade games, and a dazzling amusement park.

Outstanding in the Rain by Frank Viva
Rhyming text tells of a boy's birthday at Coney Island, while each turn of the page reveals a new meaning for an oronym - a pair of words or phrases which sound the same but have different spellings and meanings.

The Girl on the High-Diving Horse by Linda Oatman High
Eight-year-old Ivy Cordelia spends the summer of 1936 in Atlantic City with her photographer father, and dreams of being the girl who perches on a horse as it dives into a tank of water.

Feivel’s Flying Horses by Heidi Smith Hyde
A Jewish immigrant, who is saving money to bring his wife and children to join him in America, creates ornate horses for a carousel on Coney Island, one for each member of his family.

A Carousel Tale by Elisa Klevin
Given the responsibility of taking care of his favorite carousel dog's tail during the winter, Ernst, the young blue crocodile, finds, as time goes by, that he cannot resist his own artistic urges.

Zoom by Diane Adams
Illustrations and rhyming, easy-to-read text describe a father and child's wild ride on a roller coaster.

The Giant Wheel by Andre Usatschow.
Take an astonishing ride on a very unusual Ferris wheel! One day a Ferris wheel appears next door to the zoo, and the animals cannot wait to try it out. At night, they slip out of their cages and, one by one, they climb into the gondolas to enjoy the view - but never did they dream they would see so far. Are they seeing their distant homelands, or are they looking into their own hearts?

Carousel Cat by Robert J. Blake
One day, after Dan is forced to close the boardwalk carousel, he and his neighbors search for their missing cat friend at the same time that a local building catches fire.

Pearl and Wagner: Three Secrets by Kate McMullan
Pearl and Wagner, a rabbit and a mouse who are best friends, learn about secrets during a trip to an ice cream factory and an amusement park birthday party.

Little Rabbit Lost by Harry Horse
On his birthday, Little Rabbit thinks that he is now a big rabbit - until he gets lost at the Rabbit World amusement park.

George and Martha, Full of Surprises by James Marshall
In the Amusement Park, George and Martha are having a wonderful time at the park until they enter the Tunnel of Love!

Roller Coaster by Marla Frazee
Twelve people set aside their fears and ride a rollercoaster, including one who has never done so before.

You Must Be This Tall by Steven Weinberg
The story of two friends, Frank and Harold, who do everything together and want to ride a roller coaster. But one of them is not tall enough. What are these friends to do?

Bones and the Roller Coaster Mystery by David A. Adler
Junior sleuth Jeffrey Bones and his grandfather enjoy a day at the amusement park until their tickets to ride the giant roller coaster mysteriously disappear.


The Science of Amusement Parks

Carousels by Valerie Bodden
A colorful survey of carousels, including their seats and other features, descriptions of the ride experience, and a brief history. Famous carousels such as the Kit Carson County Carousel are spotlighted.

Roller Coaster, or, I Had So Much Fun, I Almost Puked by Nick Cook
Discusses the history, physics, parts, and design of roller coasters and examines some modern examples.

Ferris Wheels by Valerie Bodden
A colorful survey of Ferris wheels, including their cars and other features, descriptions of the ride experience, and a brief history. Famous Ferris wheels such as the London Eye are spotlighted.

Using Math to Design a Roller Coaster by Hilary Koll
Correlated to NCTM grade 3 curriculum standards, Mathworks! motivates students by relating math concepts and skills to real life situations. Each volume invites readers to take on a high-profile profession or an exciting sports challenge and use important facts, data gathering, and math applications to get the job done. A wealth of problem-solving activities build math skills while the colorful, high-interest approach engages students and encourages them to think about math in new ways.

The Science of Roller Coasters: Understanding Energy by Karen Latchana Kenney
In this engaging title, young readers learn about different forms of energy. Different forms of energy such as potential and kinetic are explained, as are gravity, acceleration, velocity, g-forces, and centripetal force. These properties are illustrated by the design and operation of roller coasters.

Coney Island: Visions of an American Dreamland, 1861-2008 by Robin Jaffee Frank
This groundbreaking book is the first to look at the site's enduring status as inspiration for artists throughout the ages, from its inception as an elite seaside resort in the mid-19th century to its evolution into an entertainment mecca for the masses, with the eventual closing of its iconic amusement park, Astroland, in 2008 after decades of urban decline.

Brooklyn: A State of Mind by Michael W. Robbins and Wendy Palitz
BROOKLYN, the book, tells it all. Packed with the accent, the attitude, the smarts, with nostalgia, respect, awe, laughter and news, BROOKLYN taps into one of Brooklyn's best resources-its army of writers-to tell the story of America's home town. For over 250 years immigrants from all over the world have lived in the neighborhood called Brooklyn, and fanned out to the rest of the country. An 81 square mile patchwork of city, college town, quiet fishing village, industrial center, bedroom community, and seaport, Brooklyn is the Dodgers, Walt Whitman, Mrs. Stahl's knishes, the bridge-and BROOKLYN, an obsessive and definitive book that's as colorful, interesting, and quirky as the world it celebrates. Fugehdabboudit!

Famous Nathan: A Family Saga of Coney Island, the American Dream, and the Search for the Perfect Hot Dog by Lloyd Handwerker
Written by Nathan's own grandson, and at once a portrait of a man, a family and the changing face of a nation through a century of promise and progress, Famous Nathan is a dog's tale that snaps and satisfies with every page.

Song of Brooklyn: An Oral History of America's Favorite Borough by Marc Eliot
Gathers the oral testimony of nearly one hundred Brooklynites past and present, famous and unknown, about a mythic borough that is also an indisputably real place.