Ready for Our Close-Ups 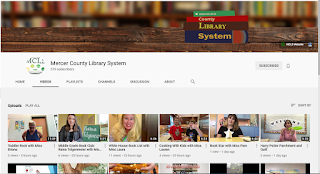 Back in March when the Mercer County Library System had to close their buildings in accordance with statewide efforts to mitigate the impact of COVID-19 and protect the capacity of New Jersey's health care system, the nine branches of the Mercer County Library System were spurred to think of new ways to bring programs to our patrons. Prior to closing our facilities to the public, MCLS branches -- our physical spaces -- had allowed us to bring our respective communities together in one place. Every month, each branch offered a wide variety of programs to patrons of all ages, such as storytimes, book group discussions, STEAM activities, gentle exercise classes, and so much more.

When MCLS temporarily closed its doors, YouTube was one of the first platforms staff used to virtually bring traditional (and new) programs to our patrons. With the technical help of our Information Technology (IT) Department, MCLS took the plunge and created a YouTube Channel as a vehicle for programming. The very first MCLS YouTube video, posted on March 14, 2020, features Pam from the Lawrence Headquarters Branch demonstrating how to make a Giant 3D Paper Snowflake. From there, Youth Services Librarians throughout the library system started recording storytimes, STEAM activities, and music & movement videos. Members of the IT department got into the spirit, creating “how-to” videos for accessing eBooks and online magazines. Videos of gentle stretching exercises, cooking demonstrations, and trivia & riddles soon began to populate MCLS’ YouTube Channel. The talent and creativity brought to our community by MCLS’ staff through video had become a catalog full of programs with familiar faces for patrons to peruse.

I reached out to some of my colleagues, across the library system, who have created YouTube videos for MCLS’ channel. I asked them to reflect on their experiences about bringing programs to the YouTube platform. I found that three major themes emerged:

Bringing Out Our Inner Extroverts

Stereotypically, librarians are thought to be on the introverted and shy side. Even for me, someone who shatters that stereotype, getting in front of the camera was initially daunting. I would much rather be behind the scenes. Mary, part of the Reference Team at the Hickory Corner Branch told me, “At first, I was shy about being videotaped.” To help Mary takes steps toward and prepare to make her first video, she looked to other librarians’ videos to gain confidence. Lauren, from the Youth Services Team at the Lawrence Headquarters Branch shared with me, “I was very nervous in the beginning. Right before we closed in March, youth services started making videos and I thought maybe I’d try one – so far I’ve created 50 videos with many more on the way!” Along the same lines, Bob, part of the Circulation Team at the Hopewell Branch and curator of 100+ trivia questions from authors, agrees that his biggest apprehension is being in the videos himself. Andrea, from Youth Services at the Hickory Corner Branch, shared, “I still don’t love being on camera, but I have learned to be kinder to myself about that.”

Work with What You’ve Got

I’m going to go out on a limb and suggest that not many of us had any kind of training in film making. Not only were we starting with little experience in storyboarding and how to “get the shot”, but we were also figuring out equipment and what technology to use. Our smartphones turned into video making machines; we sought ways to help us “up our production value”.

It’s amazing what you can do with what you have at home. Briana, a Youth Services Librarian at the Hopewell Branch, told me about an issue she had with keeping her camera shots steady and consistent. With rubber bands, some thin slats of wood, and a traditional camera tripod, Briana’s husband jerry-rigged a tripod for her smartphone. Andrea shared with me her camera “issues”, too. Originally, to keep her shot steady, she rubber banded her smartphone to an adjustable napkin holder! For me, I had the hardest time figuring out how to get “overhead shots” for when filming crafts or cooking demonstrations. My solution? I put a kitchen chair on my kitchen table. On top of the kitchen chair, I set my huge Webster's New International Dictionary: Unabridged Dictionary (2nd Edition). THEN on top of THAT, I’d place my tablet, so I could film my overhead shots. It was quite an effort just to get ready to film!

Once we had our footage, it was time to learn to edit all our clips into a final project. I definitely had to muscle through the first time I edited a video; new technology always involves a learning curve. The more we used and played with the software (e.g., video editing software, screen capture software, etc.), the more confident and creative staff became. Jennifer, Management Specialist from the Library System’s Administrative Office reflects, “I feel better equipped now that I know more about how to edit clips, merge clips, add subtitles, etc.” Andrea agrees about the editing process. She is still learning tips and tricks as she goes along -- all on her smartphone to boot! Briana embraced the opportunity to learn technologies and enjoy the off-camera work involved with creating videos. “I have fun putting clips together and making the final product,” she admits.

Even our IT Department needed to get up to speed on all things video. Coordinating staff submissions from home became a routine of checking Google Drive, iCloud, and OneDrive for various videos submitted by staff. This was followed by lengthy download and upload sessions. Laura remarked, "I am not sure I have adjusted back to Eastern time, I was working so much on Pacific time to maximize bandwidth and tech support, that works most nights lasted until just after 2:00am. But it was worth it to bring our patrons the programming they were used to seeing in the branched. The youth videos were really important since many of our younger patrons missed seeing their favorite librarians." The IT members also needed to do some on the job training to learn about the different devices and editing software used by different staff members. Amelia suffered through using an old laptop that would overheat and shut itself down while she was stitching together our We Miss You video, but used her "cool-down" time to chat with staff on how to shoot videos with their specific tablet or phone.

It Became a Family Affair

We were all home with our families. Children of all ages -- from kindergarten to post-graduate work -- were in the midst of remote learning, or their preschools/daycares were closed. It became a juggling game, creating content for our patrons while ensuring our children were (as much as possible) comfortably transitioning to this bizarre “new norm” of which we were all apart. Personally, I do my storyboarding and video recording during the day, and then I do the voice overs/narration when everyone is down for the night.

Lauren and Andrea have taken a different approach by including their children in their videos. Lauren commented that she hadn’t realized how much she fed off children’s energy during traditional in-person programs. She truly enjoys recording videos with her own kids in them. Lauren’s boys were gung-ho to be part of her Harry Potter DIY Wands and Spells video, which she admitted is her favorite video she’s made -- so far. Andrea’s video production helped give her preschool-aged daughter some routine and normalcy. Turns out Andrea’s daughter is a natural, and she ended up giving her mom ideas for videos! On a personal note, Andrea reflects, “I am so glad that I have these videos that I can look back on and remember how we got through this crazy time in our lives.”

Some MCLS staff got their entire families involved! As previously mentioned, Briana’s husband used his tripod engineering skills to help her out. Briana also sought help from her daughter, who just happened to be in her fourth year of Video Production classes offered through her high school. Her son, remotely taking college courses from home, had to learn how to stay “off the set” (i.e., out of the kitchen) when filming was in progress. Mary recruited her family, too. Her daughter, who was home with her early in the statewide lockdown, helped with filming videos. Additionally, Mary’s husband bravely volunteered to have his hair cut for the How to Do a Buzz Cut video. (As an aside, the buzz cut video has the highest viewing count on MCLS’ YouTube Channel. It’s a great demonstration AND has a surprise ending.)

One thing is for sure - being camera shy, wrestling with new technologies, or juggling family didn’t keep the staff at the Mercer County Library System from taking on the new task of bringing programming to our community using videos. There are over 1,000 videos on the MCLS YouTube Channel, and new content is constantly being added. Harry Potter Palooza, computer instruction, Literary Destinations, New Book Features, and book reviews are just the tip of the iceberg. Along with the traditional programs you have experienced in-person at our branches, you’ll also experience the amazing talent our staff shares with all our viewers. I am truly inspired by their creativity, imagination, and overall productions.

Visit MCLS’ YouTube Channel to see what’s available. Alternatively, you can find scheduled YouTube series, as well as our full listing of MCLS virtual programs on our Events Page, including those programs taking place on Facebook or using GoToMeeting (a video conferencing software).
- by Anna, Hopewell Branch
Current Events What's New at MCL