“Firsts in science and exploration require a special kind of leadership, the sort that is defined by courage; placing people on the surface of Mars is a continuation of humankind’s unending legacy of exploration.” 1 - Buzz Aldrin

On February 18, 2021, after completing a journey of approximately 40 million miles in space, NASA’s Perseverance Rover system, in what was clearly a marvel of modern scientific technology, made an impeccable landing on the surface of Mars. The goals of this epic mission of space exploration: studying Mars’ habitability, seeking signs of past microbial life, collecting and caching samples, and preparing for future human missions. Building on the success of Curiosity, NASA’s earlier Rover system, Perseverance was launched to go out further, dig deeper and conduct numerous experiments using sophisticated spectrometers, sensors, arrays of cameras and the most advanced robotic systems - all controlled by engineers millions of miles away. Space exploration in many ways brings out the very best in us - facing the most daunting challenges and finding a solution through dedication, grit, collaboration, and above all, relentless ingenuity and creativity. A selection of books available through the Mercer County Library System are featured here, providing insights to our fascination with Mars, and our search to understand the confluence of events that shaped the evolution of the Red Planet. The authors of these books come from diverse backgrounds, and together they tell us the fascinating and unfolding story of our quest to understand Mars - a source of intrigue for centuries. Despite many differences, there is a universal human desire to reach a destination beyond reach and unravel a mystery that has defied an answer. In doing so we are constantly expanding our knowledge and horizons. 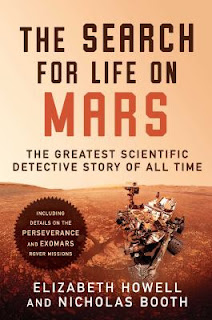 The Search for Life on Mars: The Greatest Scientific Detective Story of All Time by Elizabeth Howell and Nicholas Booth

Award winning journalist, Elizabeth Howell and journalist and broadcaster, Nicholas Booth team up to present this fascinating, behind the scenes story about the the search for evidence of life on Mars. The book is based on numerous interviews with the engineers and scientists who have shaped the Mars missions. It portrays the rich history of the Jet Propulsion Lab (JPL) and how a team of researchers from diverse backgrounds came together to seek a definitive answer on whether life ever existed on Mars. In this quest, the team has built some of the most advanced robotics systems (rovers) which can move on the surface of Mars and do an array of complex experiments. These remote systems are manipulated by the engineers at JPL, with instruction codes travelling millions of miles, controlling every movement and operation of the rover in outer space. The narratives in the book move on two parallel tracks: personal stories of researchers and what motivated them to dedicate their lives to the exploration of Mars and the evolution of the ideas they championed. The book captures the intense debate within the JPL team as they prioritized actions to be taken on different missions, anticipated hurdles likely to be encountered and prepared for recovery. Both authors have decades of experience as science journalists, and in this brilliant work they have integrated stories of space pioneers who, while exploring for evidence of life on the Red Planet, reveal what are the essential building blocks of life, and the sequence of events billions of years ago that shaped the Martian geology, its chemical diversity and rugged landscape. This story of Mars is riveting - with each mission we get more data. However, we are far from any clarity on the eternal question: has life ever existed in Mars or are we alone in this universe? 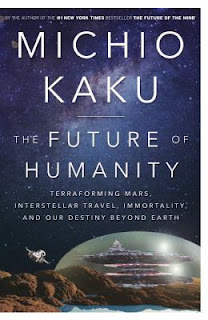 The Future of Humanity: Terraforming Mars, Interstellar Travel, Immortality, and Our Destiny Beyond Earth by Michio Kaku

In this fascinating book, eminent physicist and popular science writer, Michio Kaku discusses the future of space exploration as we contemplate building an outpost on the moon, create permanent settlements on Mars, or venture out even further in deep space to probe the existence of intelligent life. His narrative begins with the description of a titanic explosion in Indonesia some seventy thousand years ago which almost wiped out humanity. He narrates how dinosaurs, once the dominant species on earth, did not survive; and recalls how millions of other species have gone extinct. Though the human species has survived many catastrophic events, the author argues that we face a real danger of extinction. The search of a new habitable planet is not just a theoretical quest, but a goal we must ardently pursue to keep the incredible human journey alive forever. Dr. Kaku lays out the roadmap - how technology innovations can achieve this goal, how we can solve the numerous hurdles we are likely to encounter, how right now scientists and engineers are laying the foundations of future technology platforms. This includes the task of transforming the inhospitable Mars terrain, dealing with Martian gravity, protection from strong atmospheric radiation, and overcoming the challenge of growing food on the Red Planet. The author discusses how biotechnology, robotics, communications, and material science innovations will pave our way forward. Often, Dr. Kaku looks back and reminds us of mankind’s rich heritage, the incredible progress we have made during earlier innovation waves and how risk taking, adventure and entrepreneurship is embedded in our DNA. The book maintains an incredibly positive perspective, celebrating the exceptionalism of the human species. Numerous stories of past scientific explorations reveal courage and resolute determination that enabled space pioneers to overcome daunting challenges. 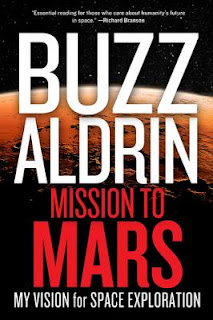 Mission to Mars: My Vision for Space Exploration by Buzz Aldrin

On July 20, 1969, Buzz Aldrin became the second astronaut to walk on the surface of the moon. Over the last 50 years, Buzz Aldrin has been a fierce advocate of the space program and a symbol of American entrepreneurship and creativity. In this inspiring book, that is sure to please all space exploration aficionados, Aldrin shares his journey and his vision for the space program, his love for science dating back to his early school days, the influence of his aviator father, his training at West Point and the Air Force, and his participation in the Korean War. His fascination with America’s space program propelled him to pursue a PhD in astronautics to improve his chances of being selected for the space program. In 1963 he was recruited by NASA and was later selected for the Apollo 11 legendary voyages. Aldrin’s strong engineering background is reflected in his masterful analysis and the exquisite details of the different components of the space program that he provides in the book. He also discusses the blueprint of the space systems that could transport astronauts to Mars. With evolving technology and changing mission priorities, Buzz Aldrin provides deep insights to what might lie ahead. He elegantly argues why the space program is vital for American leadership in technology and how a partnership between NASA and commercial business enterprises could energize space travel and spur innovation in many facets of science and engineering. One of the wonderful elements in the book is the foreword written by Andrew Aldrin, who talks about his father and the extraordinary relationship they both nurtured in pursuit of space exploration. The book is uplifting and echoes the indomitable human desire to forge ahead and reach new frontiers in the vast expanse of space.

Books to Get You Thinking Science