Although it was probably over forty years ago, I remember the first time I heard “gifted” used as a verb. I was living in Tel-Aviv and an Israeli friend, Toma, commented that someone had “gifted” something to him. This was like a jolt to my ears, it sounded so wrong. I wanted to explain to him that “gifted” was not a verb, and using it that way was ungrammatical. But not wishing to give the impression that I was a pedantic nitpicker, I restrained myself.

Toma was a self-described anarcho-pacifist (the only one in Israel who I was acquainted with, not that there were many others). He was secretary of the Israel Section of the War Resisters International, spoke Esperanto, was a strict vegan, and had very long hair. He was also a devout secularist who opposed the Israeli law which did not permit civil marriages to be performed in the country, and so had married his partner in Cyprus.

As Toma’s English was quite good, I was puzzled as to why he would do such a thing as use gifted as a verb. But upon returning to the U.S., I was much more surprised to hear native American English speakers doing that exact same thing. Since when had that become okay? Apparently Toma had been on to something well before I was. In this new world, people were also “dialoguing”, “chilling”, “friending” and “unfriending” each other. Which brings up the question, since when did “unfriend” become a word?

This phenomenon of using nouns and sometimes other parts of speech as verbs, is called “verbing”. The linguistic term for this is denominalization or verbification.

In the article, Do you salad or sandwich? The verbing of English, Jon Hird, an ESOL teacher at Oxford University, discusses verbing (a.k.a. noun to verb conversion), which, it turns out, has been a part of English for as long as there has been an English language. Raining and thundering, for example, were originally used only as nouns. Much more recently they’ve been joined by chair, highlight, access, and impact, and lots and lots of others.

Technology has been a catalyst for the proliferation of verbing, particularly with internet and electronic communication. Here we also find the verbification of proper nouns, e.g., emailing, bookmarking, skyping, youtubing, and googling.

The verbing of edibles and potables has also become popular. An example Hird gives is from a sign in a London café that reads “do you salad or sandwich?” There are now cafés in different parts of the world called “Let’s Coffee”. “Let’s Dessert” was a Hong Kong style dessert restaurant in Brooklyn, and “Let’s Burger” is a gourmet burger joint in Beijing.

Judy Muller, a former ABC television news correspondent and professor of journalism, in her “rant” finds the increasing public acceptance of turning nouns into verbs “supremely annoying”. One example that causes her to cringe is “efforting”, as in “we’re efforting that”. Another is “to office”, as in “the smarter way to office”, the company slogan of Folio Coworking Offices. And since “writing in your journal” is apparently a little too weighty, one now says “journaling”.

Unquestionably, it’s Sam Watterson in one of his Calvin and Hobbes comics, who nails the verbing phenomenon.

Calvin: I like to verb words. Hobbes: What? Calvin: I take nouns and adjectives and use them like verbs. Remember when access was a thing? Now it’s something you do. It got verbed… Verbing weirds language.

Hobbes: Maybe we can eventually make language a complete impediment to understanding.

The opposite phenomenon, turning verbs into nouns, is called nominalization. In a 2013 New York Times opinion piece, author Henry Hitchens describes two types of nominalizations: Type A and Type B. Type A involves adding a suffix to the verb, and is called suffixation. “To investigate” becomes “investigation”, “to retaliate” becomes “retaliation”. Type B is known as a conversion, i.e., when a word is switched from verb into noun or adjective into noun without adding a suffix. The result is sentences such as “I have a solve”, or “that was an epic fail.”

Like verbing, nominalizations have been used for centuries in English. Shakespeare used them in expressions like “dog them at the heels” and “season your admiration”. That may be the case, but like verbing, Type B conversion weirds language.

This brings to mind (my mind at least) the common habit of using “like” as a filler word. According to Ben Yagoda in When You Catch an Adjective, Kill It, “like” was first used by beatniks in the fifties. It was introduced to the wider public via an early sixties television show, The Many Loves of Dobie Gillis by Dobie’s beatnik friend, Maynard G. Krebs (Bob Denver). In 1982, Its popularity underwent a revival with Moon Unit Zappa’s song, “Valley Girl” on the album Ship Arriving Too Late To Save A Drowning Witch, and does not seem to have lost popularity since.

In Have You Eaten Grandma?, Gyles Brandreth expresses his intense distaste for what he calls “bad language”. This includes “words we use all the time but don’t need to – like “like” and “I mean” between every other word as well as “well” and “so” at the start of every sentence. These words and phrases serve no useful purpose, get in the way of what you want to say, and can be very, very annoying.” He especially dislikes “like”. “It is terrible the way ‘like’ has become the ‘go-to linguistic filler of our times.’”

I confess to having myself gone through a phase of using “like”, like a lot. It (pretty much) ended after an incident (“intervention” would be more appropriate) involving my brother and my then ten-year-old nephew. We were in a café chatting and I was telling a relatively short, amusing anecdote. When I finished, my brother turned to my nephew and asked, “How many?’’ That’s when I noticed that my nephew had been making tally marks on a sheet of paper while I was talking. “Twenty-six” was his reply. I inquired what the heck was going on, and my nephew told me (with a big smile) that he was counting how many times I said “like” while telling the story. I failed to find this in any way funny and told them so, but in retrospect I can appreciate that this habit had in fact become very, very annoying.

Here are some books about English that I found very entertaining:

Gyles Brandreth. Have You Eaten Grandma? Or, The Life-Saving Importance of Correct Punctuation, Grammar, and Good English. 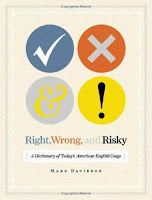 Charles Harrington Elster. What In The Word? Wordplay, Word Lore, And Answers To Your Peskiest Questions About Language.

Ralph Keyes. I Love It When You Talk Retro: Hoochie Coochie, Double Whammy, Drop A Dime, And the Forgotten Origins of American Speech.

Ben Yagoda. When you catch an adjective, kill it : the parts of speech for better and/or worse.