May 12, 2020
A few years back I wrote a blog post about a subgenre of tabletop games known as cooperative board games. As the name implies, these are games where players work together to succeed, instead of competing against one another. The challenge and randomness comes from each game’s rules and mechanics, where things like drawing cards from a deck or rolling dice create competition between the players and the game.

At that time, I was just getting into tabletop and board games and was especially new to the idea of co-op games. Since then, I have discovered another exciting subgenre of board games: the solo game.

Solo gaming, sometimes referred to as solitaire play, is simply playing a game by yourself. This may seem common when you think about PC or video games or even some outdoor activities like golf. However, for many, board games conjure up images of friends and family, gathered around a table and enjoying each other's company. This is probably due to the fact that many mainstream board games are designed for more than one player (think Monopoly, The Settlers of Catan, Risk, etc.). But, just like cooperative board games, there is a long list of games that can be played solo.

Before we get to some examples of solo board games, we should probably discuss the reasons why you may want to try playing these games by yourself:

It gives you the time to fully learn the rules and mechanics of the game without running the risk of players losing interest as you look through the rule book again and again. As we’ll see, almost all of these solo games double as co-op games, so you will be an expert on the rules by the time you decide to play with others.

You can start, pause, and stop at any time. With school, work, families, and all sorts of other obligations, it can be tough to get two or more people together for the multiple hours it takes to fully enjoy playing a game. Solo gaming allows you to make it fit into your schedule.

It can be just as fun as playing with others and is no different than enjoying any other hobby (like reading, watching a movie, playing a video game, etc.) by yourself.

Just like reading, doing a crossword, or working through other types of puzzles, solo gaming provides you with a way to exercise parts of your brain that are responsible for complex thought and memory formation.

Now onto the games:

For fans of mystery, horror, and all things H.P. Lovecraft, this “Living Card Game” allows you to explore the quiet New England town of Arkham, where you will encounter cultists, haunted houses, and eerie creatures, and where each session builds upon the last.

Take the role of world famous detective Sherlock Holmes’ partner and solve ten cases using your attention to detail and other sleuthing skills. More in-depth puzzles than your usual board game.

In the 25th century, mankind has begun to terraform the red planet, and you run one of the corporations competing to develop the new world. Conduct scientific research, build projects and infrastructure, and try to survive the dangers of space.

One of the largest games (in its physical size and scope) out there, this grimdark fantasy game gives the player control over a number of characters who set out on randomized adventures in an ever-growing and evolving world. This game may seem like more of an open-world video game or series of epic fantasy novels than any board game you’ve played before.

As a knight of the Void Council, you explore, battle, and conquer in a game that combines role-playing, deck building, and traditional board-game mechanics. Watch your army grow larger, your knight become stronger, and the unexplored world expand each time you play.

Using a deck of cards and dice rolls, this game creates unique dungeons and adventures for your newly-made character to explore. Unlike a lot of the previously mentioned solo games, this one is simple and provides fast-paced action and a game that could be played in 30 minutes. 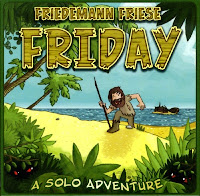 In this game, you play as Robinson Crusoe’s companion Friday, and work to help prepare for Crusoe’s escape from the island and the evil pirates trying to stop him. Another fun and fast game that should take about 30 minutes.

You must look for a way to escape a labyrinth of dreams and overcome nightmares that haunt and hunt you. One of the quickest solo games, Onirim will only take about 15 minutes but is still filled with fun and adventure.

Of course, these are only eight solo games available to play and, as previously mentioned, the list of choices is long. I picked these for a few reasons: they are all well received among board-game enthusiasts; they cover a range of game styles and genres; and you have options when it comes to their complexity and play time.

If any of the games caught your interest, or even if they didn’t but solo gaming seems like a fun time, I suggest doing some more research at BoardGameGeek (www.boardgamegeek.com) or on YouTube, where there are a number or videos that provide reviews, instructions, and gameplay for almost every game out there.